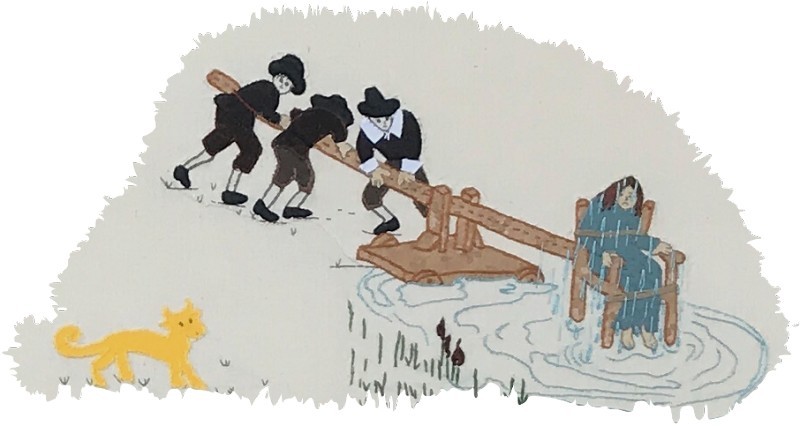 As this is the month of Halloween, I’m turning my thoughts to the subject of witches. The word witch actually comes from the old English ‘wicce’, meaning ‘wise one’. Many calling themselves witches were just that  - wise women using their experience for the good of the community. However, due to the ignorant beliefs and superstitions of the time, they came to be regarded with suspicion by people, who believed that they were doing the devil’s work.

Although witchcraft had been deemed heresy and denounced by the Pope in 1484, it wasn’t until 1563, that it was made a capital offence in England. From that date, a person found guilty of witchcraft would suffer the fate of hanging or being burnt at the stake. In England, Essex was particularly harsh in its treatment of supposed witches, hanging up to 90, between the late 16th and early 17th Century. This was far more than in any other county. Sadly, it didn’t take much to accuse someone of being a witch – a birthmark a harelip, or a mole might be enough, for a person to be seen as having a Devil’s Mark. Even having a ‘crone like’ appearance, could be taken as evidence that they possessed the ‘Evil Eye’, particularly if they owned a cat. This was because witches were believed to have a ‘familiar’ to assist them in their spells, and the most common familiar was thought to be a cat. There was a good living to be had from denouncing witches. Matthew Hopkins, known as the Witchfinder General, was paid £6 for clearing Aldeburgh of witches, while he earned £15 and £23, respectively, for doing the same in Kings Lynn and Stowmarket.  It has to be remembered that this was at a time when the average daily wage was only 2.5 p.

Once a person had been ‘identified’ as a witch, they would be ‘tested’ by being attached to a stool or chair, on a long pole, lowered into deep water and held under for some time. If when they were brought up, they were still alive, they would be found guilty of witchcraft and executed, but if they drowned, their innocence would be proclaimed. Hardly a satisfactory outcome! On a local note, there used to be a pond on Doggett’s farmland, Rochford, known as The Bobbing Pond, which was used for this purpose.

Anyone from this area, will know that there is one particular place, Canewdon, where there has been a long-held tradition of witches, associated with the village. Legend has it, that as long as the church tower stands, there will be 6 witches in Canewdon. Furthermore, every time a stone falls from the tower, one witch will die and another will take her place. Apparently when Matthew Hopkins set out to rid the country of witches, for some bizarre reason, he was specifically instructed by Parliament to stay away from Canewdon, which was a place famous for its connection with witchcraft. Not only did he concur, he made sure to avoid the whole of the Crouch area altogether!

I have come across stories of three local ‘witches’, who hail from more recent times - two men (known as cunning men) and one woman. The first man, James Murrell, was born in Rochford in 1780, the seventh son of a seventh son. He moved to Hadleigh in 1812, and became known as The Cunning Man of Hadleigh, said to be the greatest witch or cunning man that ever lived. He could apparently cast his own spells, as well as break those cast by others, cure ailments and find lost objects. It was said that he could summon good spirits or angels to fight evil spirits, and, was sought out by wealthy aristocrats as well as local people.

The second man was George Pickingill, a Romany, who was born around 1816 in Hockley. Although he was said to have the ability to cure ailments and find lost objects like James Murrell, according to some, he used curses and malevolent magic to achieve his ends. He moved to Canewdon, and worked there as a cunning man.  He had the ability to control animals, and was known as a horse whisperer. He died in 1909, his passing undoubtedly coming as a relief to many local people who had been intimidated by him over the years.

The third ‘witch’ was Elizabeth Eleanor (known as Nelly) Button, who was born in 1818 in Purleigh. She married a man named Zachariah Button, from Hawkwell, in 1853, and moved to live with him in Hockley. Nelly, apparently had a malevolent streak, like George Pickingill.  According to legend, she was able to hypnotise those she disliked, so that they lost the power of their limbs; played occult pranks, such as making the blacksmith’s concertina play day and night for weeks on end, leaving the blacksmith a wreck from lack of sleep; and punished a woman by making the dumplings she was cooking fly up the chimney, which nearly gave the poor woman a heart attack!  Villagers despaired of her behaviour, until one remembered that witches couldn’t cross iron, and planted a hedge of old knives and scissors round her house to keep her a prisoner. Nelly died in 1896, but I have no idea if by then, she had managed to cast a spell to make good her escape!

The image for this research is taken from panel 6 of the Rochford District Heritage Tapestry, 'Turbulent Times'.