Login Register
You are here: Home Historic RochfordHistory of Rochford

The Origins of Rochford

The market at Rochford was established in the mid-13th century and this is when the first evidence of settlement in the historic town centre dates from. However, Rochford is mentioned in the Domesday Book in its entries for both 1066 and 1086 and the name itself is Old English, probably dating back to the 5th or 6th centuries. So where was the earlier settlement?

The area has been used by humans as far back as the Stone Age as artefacts from this period have been found. Celtic coins have also been found in the Roach. These peoples left no evidence as to where their settlements actually were though. The remains of a Roman building were found in 1837 when the Rochford Union Workhouse was built, but the excavation was not recorded. It is likely to have been a villa or other rural building as there is no evidence for a Roman town here.

However, the area was heavily used by the Romans. Indeed many field boundaries and parts of the road network still reflect those laid out in the Roman and post Roman period. This shows up as rectilinear fields and straight roads meeting at right angles. North Street, West Street and South Street are good examples of this.

The next wave of settlers were the Saxons so where was Saxon Rochford? To answer this, another question can be asked. What is missing from the town centre? The answer is a parish church. The parish church of St. Andrew’s is around a mile away by Rochford Hall in Hall Road. The current church dates from the 14th century with a later 15th century tower. This would have very likely replaced an earlier Norman stone church when they went out of fashion. This in turn would have likely replaced an earlier Saxon one after the Norman Conquest in 1066.

Rochford Hall would have been the seat of the lord of the manor who had the church built nearby. The core of the early settlement is likely to have surrounded these two buildings. The remainder of the Anglo Saxon settlement was probably scattered around the parish as hamlets. Some of these are named on 19th century maps and still exist today.

What's in a name?

Another clue is in the origins of the name Rochford itself. Firstly, it does not mean “Ford on the Roach”. The river was named after the town in the 19th century by Victorians who assumed Rochford meant “Ford on the Roach” and so named the river thus on their maps. This is known as a 19th century ‘back formation’. Other examples in Essex include the rivers Chelmer (Chelmsford), Ching (Chingford) and Rom (Romford).

The River Roach was formerly known as the Walfleet from the Old English Wealhfleot pronounced “wayala fleot” meaning “foreigners’ river”. It also appears locally in Wallasea from the Old English Wealas aeg pronounced “wayalas ee” meaning “foreigners’ island”. These foreigners were probably Romano-British as there is evidence that the Saxon settlers were living alongside them in this area. The country of Wales takes its name from the same word, as does Cornwall (Cornish foreigners). The walnut also has the same origin. The hazelnut was the native nut in the Anglo Saxon homelands, so when Romans introduced the walnut, it was called the foreign nut.

Rochford was probably originally derived from Old English ræcc ford. Ræcc pronounced “Rach” (a short ‘a’ as in rash). This meant a setter which was a type of dog which hunts by scent. So Rochford means ford of the hunting dog(s). It probably got changed to Roche Ford by the Norman French clerics who were the first to record it in the Domesday book. They struggled with the spelling and pronunciation of Old English names, many of which had never previously been written down.

As to where the ford was, one is shown on the main branch of the Roach on a footpath south of the church on 19th century maps. However, the Roach has changed its course both naturally and with human help many times over the centuries, so it is hard to say for sure where it was. All that can be said for certain is that it is an early name, as landscape features such as fords tended to be the first things to be labelled by the Anglo Saxons.

The 13th century was a time of increases in population and trade. New market charters were issued by the king to raise money and new towns were set up around them. The lord of the manor would buy the charter from the king. He would then choose the site of the market. This would normally be some distance away from his hall as he would not want such noisy and smelly activities happening on his doorstep.

This is what appears to have happened to Rochford. The market was set up at the junctions of the roads now known as North Street, East Street, South Street and West Street dates from this period. Any peasants living around the hall would have either migrated voluntarily to the area around the market or may have been forced to do so by the lord.

Apart from the Old House and Kings Hill, most buildings around the market are from the 17th century onwards, but the plots they occupy probably date back to the origins of the town. Indeed, excavations at Horner’s Corner and elsewhere seem to confirm this. The town then developed around the market. 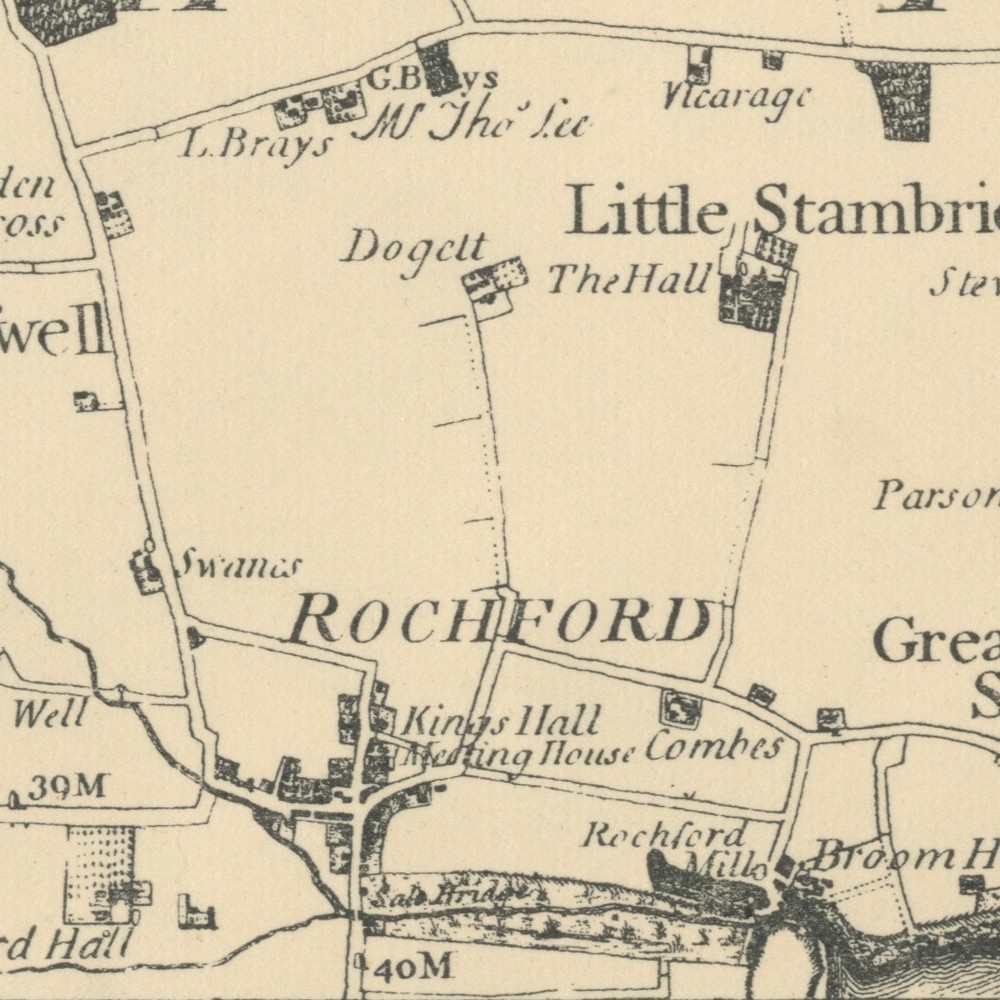 Rochford also gave its name to the District Council area. This covers 65.44 square miles. Many people wonder why the area is not named after Rayleigh, which is a much bigger settlement within the District. To answer this, the area must be viewed as it was in the past, not as it is now. The earliest accurate map of Essex was surveyed between 1772 and 1774 by Messrs Chapman and Andre. It was published in 1777.

The landscape it shows had probably changed little over the previous centuries and is quite different to the present. Southend-on-Sea doesn’t yet exist, save for the small hamlet of South End positioned on the sea front, east of where the Kursaal now is. This was most likely named as the ‘South End of Prittlewell’. Rochford and Rayleigh are villages of roughly equal size.

They were named after a landmark or settlement in the centre of the Hundred, where the Hundred court met. The early courts met in the open air at a landmark, tree, tiny hamlet or town. It just had to be in the middle of the area which Rochford was. The Rochford Hundred covered the whole of the current Rochford District Council area and the Boroughs of Southend-on-Sea and Castle Point. Later on, the court met in Inns or other places. Some eventually had their own buildings. These were judicial courts and also acted as the local government for the area.