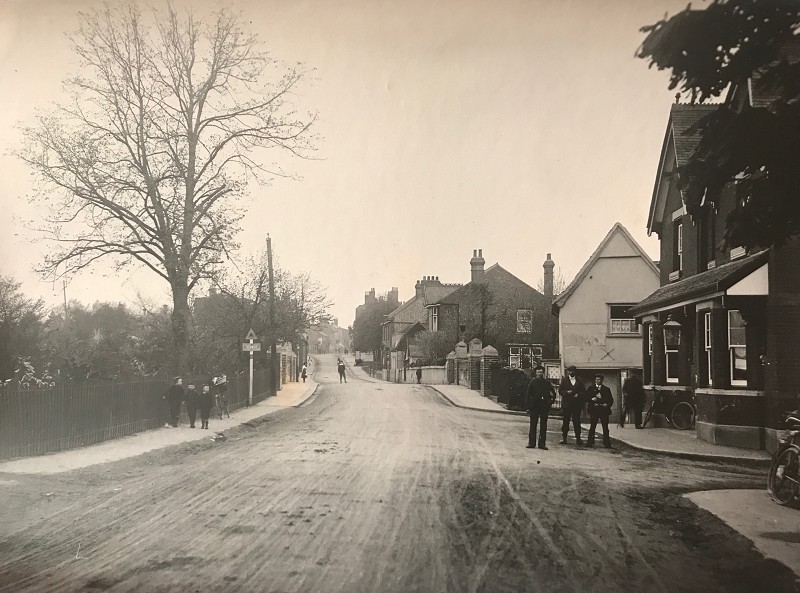 Back to books & research
Captain Strachan & The Horse and Groom pub, Rochford

It all started with a book I was reading, ‘A History of Rochford’, written in 1978, by L.R. Cryer. In the section about the inns of Rochford, Cryer wrote about a small residence next to The Horse and Groom pub which ‘was occupied in the last years of the 19th Century, and on into the next century, by Captain Strachan, a German born in 1861, who strutted the streets of Rochford, in breeches and gaiters, especially for a week or so after the arrival of his pension of £8 per month.’ Cryer added ‘Strangely enough I found he had English Christian names when I finally traced his burial at Hockley on 3 February 1913, where Rev. Nixon, a retired clergyman, helped at the service.’

I was immediately hooked on finding out more about this eccentric man. Not only did he have English Christian names, but the surname Strachan suggested Scottish ancestry, rather than Germanic. I started by googling Captain Strachan and his burial details, and up popped the ‘findagrave’ website, where there was actually a photo of Captain Strachan’s headstone in St Peter and St Paul’s churchyard. The transcription read as follows. ‘Captain Walter James Rogers Braide-Strachan, late Royal Artillery. Youngest son of Francis Rogers of Kensington Park Gardens. Died aged 52.’ With this information I searched on the internet for anything relating to Captain Walter James Rogers Braide-Strachan and found the following information in a document entitled : List of Officers of in the Royal Regiment of Artillery (1716 – 1899). Walter enlisted as a ‘gentleman cadet’ on 15th January 1878, became a lieutenant in 1880 and a captain in 1889. On another website, he was shown as having been in Kitchener’s Fighting Scouts (Reg no 827) during the second Boer War (1899 – 1902). I have no idea what name Walter used when he joined the army, but all the army records I have seen, refer to him with the double-barrelled surname of Braide-Strachan, the name which was to appear on his gravestone.

I turned to Ancestry to see if there was any obvious reason why the captain had added two additional surnames to the family name of Rogers. It was easy to trace the Rogers family and from censuses I discovered that Francis Rogers was born in Ireland around 1818 and had a wife Eliza (born in W. Thurrock, Essex around 1826). The couple married in 1849, and had at least nine children, including Walter James, who was born in Islington, on 10 April 1860. He was later baptised at St Mary, Islington on 31 May 1860, with his father’s occupation being shown in the records as Gentleman. From the census records, I learned that Francis was a Master Gin Distiller, and it is clear from the fact that they had domestic servants, that this was a well-to-do family. Indeed, by the time of Francis’s death, in 1877, the family had moved from Islington to the affluent neighbourhood of Kensington Park Gardens. It was only when I saw details of the will made by Francis, that I realised just how wealthy the family was. He left almost £25,000 to his wife and family!  His wealth obviously came from his profession as a gin distiller, and his being a partner in the firm of Smith and Rogers, Wine Importers and Distillers of Charlotte Street, Fitzroy Square.

I followed the fortunes of some of Walter’s siblings, and found a sister who had noted a change of name on the 1911 census, but it was minor – she just wanted to be known as Lucy Mary Ann, instead of her birth name, which was Mary Ann Lucy. At the time of the census, she was living with her retired school master husband, and running what was no doubt a genteel boarding house in Margate. Did she have any idea that her brother Walter was strutting around Rochford, passing himself off as a German?

Having delved into the Rogers family history, I have been unable to find any reason why Walter did not go through life simply as Rogers, like the rest of his family. I had wondered if the extra names came from his mother’s side of the family but Eliza was born and baptised as Eliza Capon (Caporn) daughter of James Caporn.  I have ‘found’ a Herbert Braide Strachan, born in Edinburgh in 1862, who later lived in Liverpool, but I see no reason to connect him to Walter. There is also a mention of a woman in Jamaica, Isabella Braide Strachan, but all I know of her is that she wrote a letter on 6th August 1878, remonstrating with the Royal Geographical Society, for not allowing the election of women as fellows of the society. Could it be that the formidable Isabella had some connection to this mystery? Might she have taken Walter to be her heir, on the understanding that he adopted her surnames, tagging them on to his own surname of Rogers?  Who knows?   I’d love to get to the bottom of this mystery, and discover why a young man from a wealthy family, who had been a captain in the army, should come to end his days in Rochford, pretending to be German. Any ideas, anyone?