This panel draws together the local and national threads of Saxon, Danish and Norman history. It starts with the most significant event of the Anglo-Saxon period in the Rochford District – the Battle of ‘Assandun’ (sometimes spelt ‘Assandune’) in 1016 between the forces of Cnut the Great (whose father was still King of Denmark at this time) and Edmund Ironside (King of England).

It then moves to the building of a Christian chapel on Ashingdon hill in 1020 on the orders of Cnut to commemorate those who had fallen at that decisive battle. The first priest at Ashingdon, Stigand, went on to become Archbishop of Canterbury.

Stigand attended the coronations of both King Harold and William The Conqueror in 1066. He is depicted as being unhappy at these events, as he couldn't actually crown either monarch since he was excommunicated at the time.

The Bayeux Tapestry shows Stigand at the coronation of Harold, thereby linking Ashingdon to this masterpiece. Odo, Bishop of Bayeux and half-brother to King William, ordered the creation of the Bayeux Tapestry. Odo owned lands in Barling, Beckney [once part of Ashingdon and Hockley], Stambridge and numerous areas across Britain.

Why not pay a visit to St. Andrews Minster and see if you can identify which part formed the original 1020 church? Check your answer at the information board outside at the far end of the church. If the church is open, it’s well worth a look around; pause too for reflection in a building where people have worshipped God for over 1,000 years.

Ashingdon Minster is 1,000 years old in 2020. The significant Battle of ‘Assandun’ in 1016 saw Edmund Ironside defeated by Cnut the Great of Denmark, which changed the course of English history. The first priest at Ashingdon Minster, Stigand, links Ashingdon to King Harold, William the Conquerer and the Bayeux Tapestry. 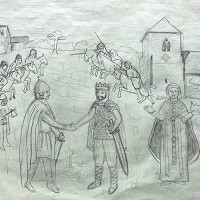 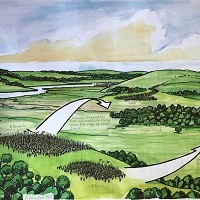 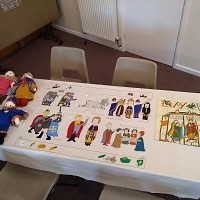 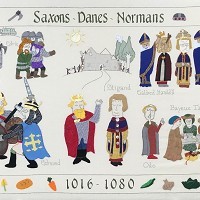 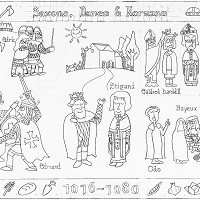 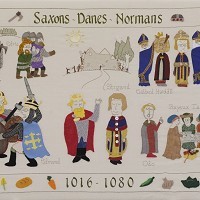 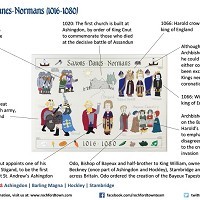 Where to view this panel

Viewing times to be advised

How to get here

Enter postcode for directions to this tapestry: